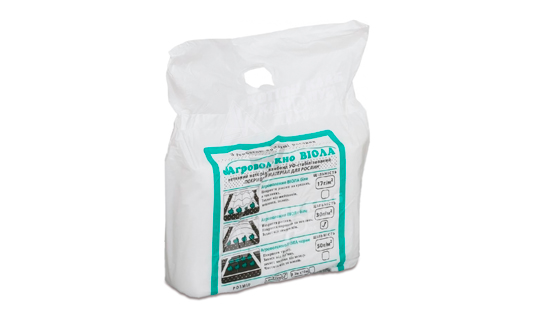 IN SPRINGTIME
White agrifiber of any density can be used to protect crops of peas, sugar corn, cucumbers, courgettes, squashes, pumpkins, melons from birds (for example, pheasants, chickens, ravens) who like to eat sown seeds and young growth of these vegetable crops. For this purpose, immediately after sowing, beds of 1 meter width are covered with white agrifiber of a width of 1.6 meter and the edges are pressed to the ground with wooden plates, bricks, soil lumps, plastic bottles filled with water, or cellophane balls filled with soil. After the emergence of seedlings for soil cultivation and weed control, the agrifiber is removed, the soil is cultivated and weeded and immediately covered again. So the plants grow under the agrifiber, until they reach a height of 10-15 centimeters. Then they can be safely opened because the birds can no longer harm the crops.
This coverage not only provides protection from birds, but also allows you to get an earlier vegetable production due to the fact that the temperature in the early spring under the cover is higher than in open ground and, accordingly, the seeds grow more quickly and the young growth develops better. The best growth of plants is also due to the fact that when the soil is covered with agrofiber, then the moisture is less evaporated and therefore the plants are better provided with water, less need for watering.

Protection from pests.
Early-summer crops of radish, covered with white agrifiber, are less affected by cruciferous flea, as radishes manage to grow up before the onset of hot weather, in which the best develops cruciferous flea, and also because agrifibre serves as a mechanical barrier that pests need to overpass to get to plants . Also, the affection of potatoes by the Colorado beetle diminishes if the sprouted during the month under the light potatoes are planted in the early days (in the lowland of Zakarpattia region, it is the end of March - early April), and cover it with white agrifiber, then it manages to build up a significant vegetative mass until the moment when the Colorado beetles are activated. This way, pesticide loading can be reduced, as the number of treatments is reduced by insecticides, and sometimes it is possible to grow environmentally friendly products without the use of pesticides.

Forcing out early greenery
Under the white agrifiber of any density can be forced out an early greenery of parsley, celery, sorrel, shchavnat, multicircled onion, chives onion, shallot. For this, the bed on which these plants grew from autumn, in the early spring, as soon as the snow comes down, they are covered with white agrifiber. This allows you to get greenery 2-3 weeks faster.

Growing seedlings.
In greenhouses, the frames of which are covered with white agrifibers of 50 g / m2 density, it is possible to grow high-quality seedlings of tomatoes, peppers, eggplants, lettuce, porridge, celery, cucumbers, watermelons, and decorative crops.

Rooting of cuttings.
Cutting of grape, currant, jostaberry, actinidia, Chinese lemongrass, mulberry, figs, shiferdias, blackberries, honeysuckle original and decorative, weigela, forsythia, privet, tuy, boxwood and other crops are well rooted in greenhouses, the frames of which are covered with agrifiber with a density of 50 g/m2. This allows you to receive high-quality gardening material of these crops.

Selection.
As you know, in order to produce new hybrids and varieties, breeders use artificial pollination. To do this, it is necessary on a mother plant to isolate the flowers from getting into them pollen, which is carried by insects-pollinators, and then conduct artificial pollination with pollen of the parent plant. To isolate the flowers of the mother plant, you can use white agrifiber with a density of 17 g/m2. For this purpose, sucks are sewn from the agrifiber, which can be worn on branches of fruit, berry crops, grapes, on vegetable cages. To fix the sucks you can use strips or stapler.

Mulching.
Black agrifiber with a density of 50 g/m2 can be used for mulching of a round-barreled trees, around bushes, straw beds, cucumber, cucumber seeds, pumpkin seeds, squashes, tomatoes, peppers. It is an environmentally friendly means of fight with weeds, which prevents from use of herbicides and, thus, makes it possible to grow an environmentally friendly products. In this case, perennial plantations can be mulched with one and the same agrifiber for several years.

Frost protection.
The agrifiber is used to cover planted seedlings of heat-loving vegetable crops such as tomatoes, peppers, eggplants, cucumbers, beans, sugar corn and others. This allows you to plant seedlings in the field at the earlier terms and get the larger early harvest. Tie-up of bushes of grapes with the help of agrifiber strips.
IN SUMMER
Protection from hailstones.
Covering with white agrifiber material protects plants from damage of small sizes hail, extinguishing force of impact.
The drying of the harvested onion, garlic, potatoes, collected vegetable seeds, decorative and medical crops can be carried out on agrifiber, which was removed from the beds in the beginning of summer, washed up and dried.

Protection of crops of summer siderates from birds.
In summer, after harvesting onions, garlic, early potatoes, beds that are released, they sow peas, beans, mustard seeds, oil radish, phacelia, winter rye and other crops that grow as green fertilizers. Seeds are covered with white agrifiber.

Mulching. Rooting of cuttings. Protection of early grape sorts from wasps.
At the end of summer, early sorts of grapes begin to mature, and as the sucrose content of berries rises during this period, the ripe berries are often damaged by wasps. To prevent this, you can use agrifiber with a density of 17 g/m2 and a width of 3.2 m, which is sold in rolls. It is convenient to cover grapes that are grown on espaliers of 1.5-2 meters height. At the same time, the length of the agrifiber, which is used, is equal to the length of the espalier. The fiber is put on top of the espalier so that the fold, which was in the roll during the twice assembly of agrifiber and winding, overlapped over the top wire, and on both sides the espalier hung down 1.6 meters, which are fixed with a stapler. Such covering also protects the grapes from being eaten by birds. It makes sense to set the covering when the first cases of damage to grapes by the wasps and birds are noticed and to take it off together with the collection of grapes when the berries reach the desired sugar content and fully matured.

Harvesting plums, cherry-plums, apples, mulberry, and others. for the preparation of jams.
The agrifiber is spread under the crown of trees and the fruits are shaked on it. This allows you to quickly collect the fruits, excluding the pollution of them by soil particles.
IN FALL
Protection of crops of winter siderates (wheat, rye) from birds. Frost protection. Mulching. Harvesting.
Covering of heat-loving crops such as grapes, figs, laurel, sage, kiwi, young trees of persimmon, thuja, magnolias, rhododendron bushes, David's budleya and others for the winter. The covering is made of white agrifiber, can be used from one to several layers of covering.

Protecting the stems of fruit crops from the rodents.
In winter, bodies of young trees of apple, pear, plum, mulberry and other crops can be damaged by hares and mice. Often, this leads to the death of trees. Therefore, in the end of autumn, before first snow falling, we must wrap the trees of the trees with white agrifiber of any density and leave this protection until spring.
IN WINTER
Mulching. Covering of heat-loving crops for the winter. Protecting the stem of fruit crops from the rodents.
An additional covering with white agrifiber beds in greenhouses allows you to save on the heating of greenhouses. The use of agrifiber as an insulation during the storage of vegetables in trenches, basements, glazed loggias. In this case, stored vegetables are covered with one or more layers of agrifiber. It is necessary to ensure that in the incubation of vegetables the optimum temperature for this species and grade is maintained.

Thus, the agrifiber can be used throughout the year and it will help to obtain environmentally friendly products.

This email address is being protected from spambots. You need JavaScript enabled to view it.